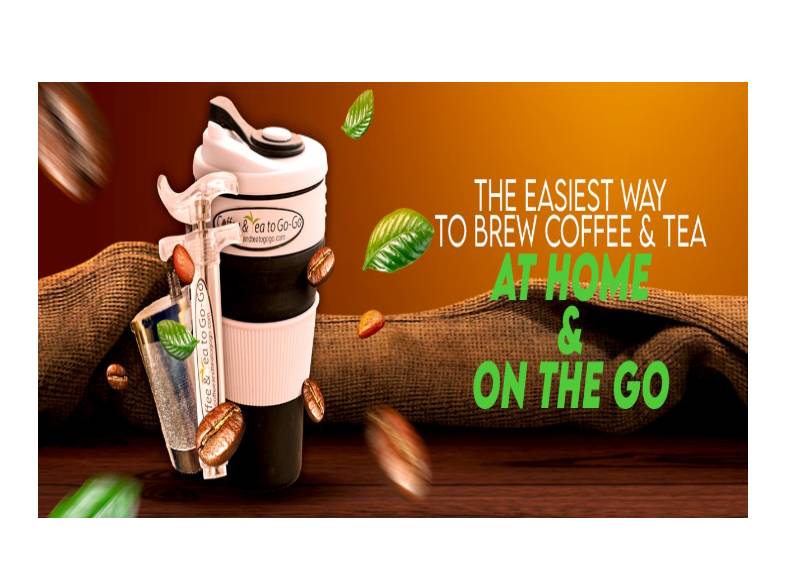 Every cup of tea or coffee can have a substantial impact upon the environment. These beverages require cups, filters, pods and stirrers that are discarded after only a single use. An estimated 50 billion cups get thrown away each year in the U.S. The pods associated with pod-based, single-use coffee brewers contribute to the huge quantity of waste that our beloved hot beverages cause. Coffee & Tea to Go Go

aims to mitigate these issues, and is presently being financed via Indiegogo. Support the campaign here.

dual purpose filters are sustainable, reusable, environmentally friendly, filters, and can also be transformed into the world’s smallest and most light-weight portable micro-brewing products. At less than six ounces, they constitute the lightest and the smallest micro-brewing kits available. The kits include a filter with two tops, collapsible silicone cup, filter brush and spoon combo and siphon/pump. Coffee & Tea to Go Go

The filter is incredibly versatile on account of the fact that it has two tops. Its indoor top for office and home fits every machine that holds Keurig K-cups, which account for just under three quarters of the market share). Its outdoor top is aimed at use everywhere else. The collapsible cup is also a carrying case for holding the set and a brewing device. The pump/siphon used with our outdoor top allows you to control the strength of the brew. In less than thirty seconds, you’ll get the flavor you desire. You can also make use of your own premium tea and coffee with it and save time and money waiting your local tea or coffee shop.

was created with great passion for hot beverages, but also for spreading kindness. They want to raise awareness of the humanitarian crisis in Ukraine and give back to those in need and will be donating 10% of the proceeds from every subscription purchased at $15 (8oz) or $20 (1lb) to the largest Ukrainian charity United24.  Since coffee is a vital drink for soldiers on the battlefield, in addition, for every 10 Coffee & Tea to Go Go

purchased or $50 raised on Indiegogo, 1 Coffee & Tea to Go Go

cup will be sent out to a Ukrainian soldier.

Although the connection between coffee and freedom fighters might not seem immediately obvious, the high demand for coffee amongst Ukrainian troops is well-documented, with 10s of thousands of cups being served daily to soldiers.  According to a recent article in men’s magazine GQ, over 2,000 kg of coffee is consumed in military bases, medical units and shelters there. The magazine reported that soldiers say that if they have a free hour to relax in, they like to make coffee, as they feel it gives them a sense of normality. Stuart White, CEO and founder, who invented Coffee and Tea to Go Go, said, “After discovering, just how essential coffee is to the military worldwide (I simply googled war and coffee and was amazed at all the articles that I discovered), I decided to make this Indiegogo campaign more impactful and meaningful.  Soldiers need to take some solace and comfort whenever they get a moment just to alleviate and relieve the pains of war.  We are our world., and if backers to this campaign could collectively come together to help to make even a small difference in this senseless war, we can all do something altruistic, philanthropic and feel great about it!  It’s really simply synergy: you get and give-back at the same time. Stand – and in this case Sip – With Ukraine for their struggle for sovereignty, freedom and liberty that they all deserve.”

The firm has partnered with coffee and tea companies and includes curated and artisanal tea and coffee subscriptions with a choice of over fifteen varieties as bundled perks. Why not be the first person to try this spectacular micro-brewer along with subscriptions at discounted prices, spreading kindness to others? Check out their campaign on Indiegogo for more information.